For nearly 20 years, a statute of gorilla in a cage has been displayed at Community Park playground in Corsicana, Texas. The statue was reportedly placed inside a cage to avoid children getting hurt if they climbed on it. However, over the past few weeks, Corsicana Mayor Don Denbow received 45 complaints that the gorilla was racist. The statue was removed.

A long-time resident wrote to the Corsicana Daily, “The gorilla is a black ape confined in a unbreakable cage. I am sympathetic to the idea that it could be thought of as a metaphor for the institution of slavery. I support the removal of the gorilla on the grounds that it could offend members of our community. At no time did I ever think of it as anything other than King Kong.” A protester who was against the statue being removed told CBS DFW: “In a situation like this where it’s a toy for children, it’s only racist if you make it racist.” Take a look at the statue below: 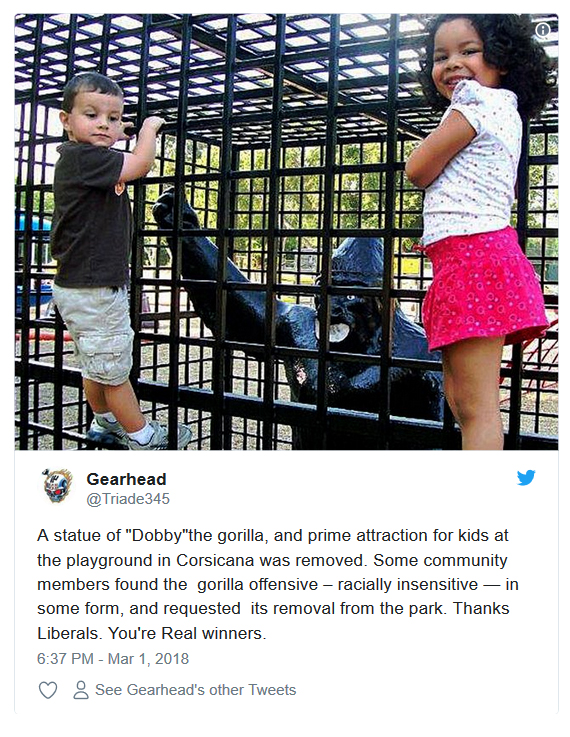 Mayor Denbow said in a statement, “The City of Corsicana recently made the decision to remove a display in Community Park. The reason for the decision was two-fold: Recognizing that the display was offensive to some of our citizens and a concern regarding the safety of the exhibits.” However, things have quickly changed. Due to the outrage over the outrage, Denbow said the statue will be returned “in some form.”