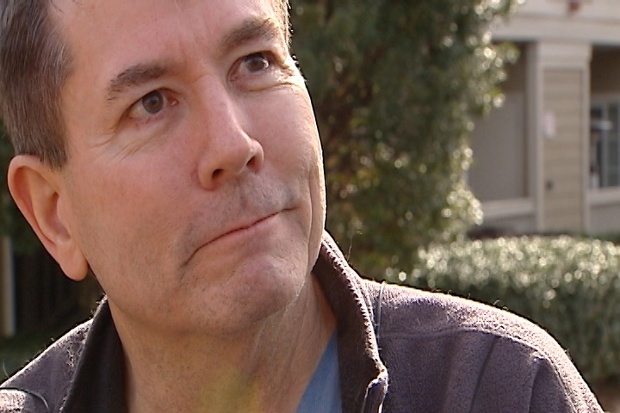 Gene Taylor said he was returning to his apartment at the Preserves at Woods Lake around 8:30 p.m. when masked men approached him demanding money. He says they hit him on the head then shot him in the leg when he refused their demands.

“It’s kind of ironic. I spend 16 years in law enforcement, got shot at and shot at people and never got hurt. And then just bringing in groceries, somebody sneaks up behind you, pulls a gun, robs you and you end up getting shot and here you are on the other side of everything,” Taylor said.

“He deliberately with all intent put it jammed up against my thigh, I got powder burns,” Taylor said. “It was like a sledgehammer.”

“They were both, my guess would be very young. Sixteen to 20 years old and black males. The one with the bandana looked to be a very clean-cut kid. The little bit I could see of him. The other one had a full-face Halloween-type mask. Both of them 5 foot-10 to 6 foot-1,” Taylor said.

“I have a feeling I was one of the first people they encountered. They probably didn’t expect former law enforcement that might actually try to do something,” Taylor said.

Taylor was unloading groceries from his rental car when he was pushed from behind.

“I turned around and he said give me your money or I’ll shoot you,” Taylor said.

Taylor said he gave him a checkbook, but the gunman didn’t want it. Taylor grabbed the gun.

“Pushed it in toward him. But, when I was doing that a second guy jumped out of the car and I was hit in the head with something by one of them. I went down and then he shot me and then I thought maybe this is a good time to give him the money,” Taylor said.

Taylor said they took off with his wallet and he went in the opposite direction, knocking on several neighbors’ doors for help. Finally, he said, one neighbor came to the door and gave him a belt to use as a tourniquet.

Taylor said he couldn’t connect to 911 on his cellphone, so he called the county he used to serve. He remembered the Anderson County Emergency Services number who notified Greenville police.

Taylor is expected to recover but spent Saturday night at the hospital with injuries. “I’m still going to come in and out of my car. I might be a little better armed,” Taylor said.

“You know, it makes me angry. It’s one of those coulda- woulda-shoulda things. All the things you could do differently. It’s not that I’m thinking, ‘I wished it didn’t happen.’ I would really like to get the little s.o.b and wish I had and didn’t and I don’t want him to hurt somebody else,” Taylor said.

Greenville police ask if you know any information about this case to call Crime Stoppers at 864-23-CRIME.