White supremacists are encouraging members who contract novel coronavirus to spread the contagion to Blacks, cops and Jews, according to the FBI.

In a February intelligence brief obtained by ABC News, the FBI’s New York office reports that “members of extremist groups are encouraging one another to spread the virus, if contracted, through bodily fluids and personal interactions.”

The brief, written by the Federal Protective Service, alleges these racist groups believe it is their “OBLIGATION” to spread the virus, specifically targeting “law enforcement and minority communities, with some mention of public places in general.”

According to the brief, these discussions took place on a Telegram app channel that focused on “siege culture.” Extremists want followers to use tactics such as spray bottles to spread bodily fluids to cops on the street. 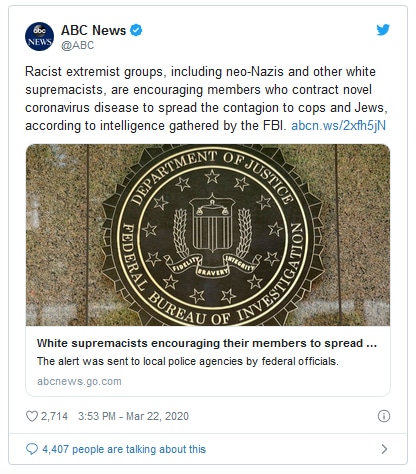 They have also suggested that infected individuals “spend as much time as possible in public spaces with their ‘enemies” and leaving bodily fluids such as saliva on the doors, handles and elevator buttons at local FBI offices, as well as spread germs in non-white neighborhoods.

“Anti-government folks in America love to target law enforcement as a symbol of America’s authority,” said Don Mihalek, the executive vice president of the Federal Law Enforcement Officers Association Foundation and an ABC News contributor. “It’s just sad that that’s their focus at a time of crisis in the nation.”

The brief is dated the week of Feb. 17-21, about three weeks before the World Health Organization acknowledged the coronavirus as a pandemic.

“From pushing the idea that Jews created the coronavirus virus to sell vaccines to encouraging infected followers to try to spread the illness to the Jewish community and law enforcement, as the coronavirus has spread, we have observed how white-supremacists, neo-Nazis and others have used this to drive their own conspiracy theories, spread disinformation and incite violence on their online platforms,” said Michael Masters, head of Secure Communities Network, an advocacy group for Jewish organizations and synagogues in the country.