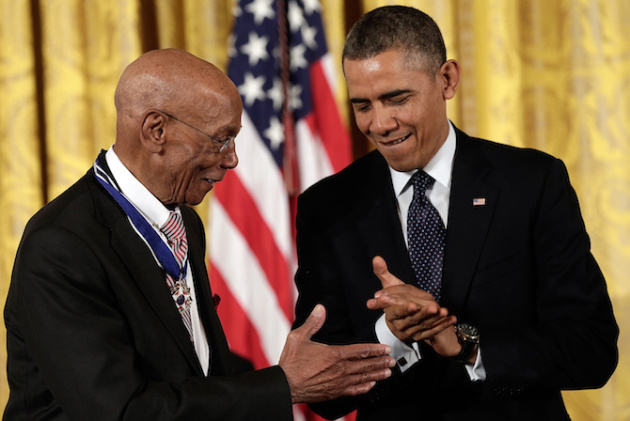 Former Chicago Cubs shortstop, Ernie Banks—affectionately known in baseball circles as ‘Mr. Cub’—died Friday night at age 83. The cause of Banks’ death has yet to be revealed, but there was an immediate reaction both in and outside of baseball once the Cubs’ broke the news.

‘Michelle and I send our condolences to the family of Ernie Banks, and to every Chicagoan and baseball fan who loved him,’ President Obama said in a released statement. President Obama presented Banks with the nation’s highest civilian honor, the Presidential Medal of Freedom, in 2013.

Banks hit 512 home runs during a 19-year career that began in 1953 when the Chicago Cubs made him their first African-American player by purchasing his contract from the Negro League’s Kansas City Monarchs for $10,000. ‘Mr Cub’ played in 14 All-Star games, was inducted into the Hall of Fame in 1977, and he became the first Chicago Cub to have his number retired.