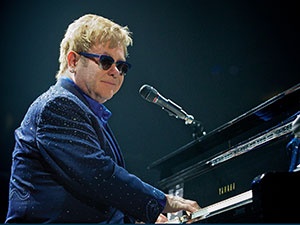 GREENVILLE, S.C. —Upstate fans of Captain Fantastic, get ready to rock in Greenville.

Elton John and his band announced they will return on Friday, March 13 as part of the “All The Hits” tour.

The concert is set for Friday, March 13, according to a release from Live Nation, which also announced other performances in the south including Fayetteville, Ala.

News stations in other cities on the tour, like Reading, Pa., reported people lining up for hours before tickets went on sale for the Feb. 28 concert.

6,000 tickets sold during the first hour there, with the cheaper tickets selling within the first 50 minutes, leaving only those priced up to $139 toward the end, according to a report by WFMZ-TV.

Live Nation says the tour will feature iconic hits and classic album tracks from throughout his incredible five-decade career, including a selection of songs from his highly acclaimed remastered album, “Goodbye Yellow Brick Road,” which recently celebrated its 40th anniversary.

According to the official Elton John website, he also has concerts scheduled in New Orleans, Miami, and Orlando.

“Elton John is one of the greatest artists of all time, and we are honored to welcome him and his band back to Greenville after over 7 years,” said Beth Paul, general manager for Bon Secours Wellness Arena.

“Elton John concerts are unforgettable events and this will be a historic night that no one should miss.”