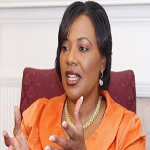 As our country engages in serious discourse over violence and gun control, Bernice King reminds us of her father’s message 45 years later.

The youngest daughter of Martin Luther King Jr. believes that her father’s platform against violence is just as essential today as it was during the civil rights movement. King and other Christian leaders said that in lieu of the tragedy in Newton, Connecticut it is important to continue fueling the non-violence movement.

To emphasize her message King recalled a statement her father once shared about the power behind non-violence:

King added that community leaders, preachers and schools should be increasingly proactive in spreading this message.