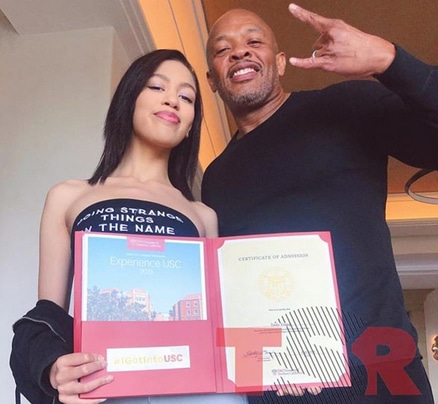 Dr. Dre is feeling himself these days and in the process he’s sending a message to Lori Loughlin, Felicity Huffman and all the other parents involved in the college bribery scandal. You see, he’s gloating that he didn’t have to do what they did to get his daughter accepted in the university.

The good doctor and proud papa just shared a photo with his daughter, Truly Young, holding up her Certificate of Admissions letter from the University of Southern California.

“My daughter got accepted into USC all on her own. No jail time!!!,” Dr. Dre wrote.

As we’ve reported … Huffman, Loughlin and her husband are facing criminal charges for allegedly paying to get their kids into the prestigious school by fraudulent means.

Loughlin’s daughters have already formally left USC and could be banned from campus forever.

Dr. Dre clearly doesn’t think he has any reason to worry about something like that happening or any legal issues with her attending the college.

Some folks might take umbrage with the rapper’s claim that his daughter got accepted on her own, though — he and Jimmy Iovine founded the USC Jimmy Iovine and Andre Young Academy a few years back … and there’s a hall on campus named after them.

That may have had a little something to do with it … just maybe.