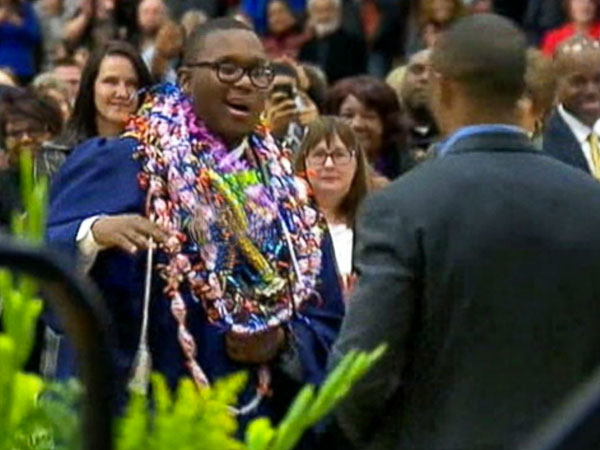 Dom Cooks, 18, a senior at Decatur High School in Federal Way, Washington who suffers from an inoperable brain tumor, celebrated an early graduation with his twin sister Thursday night after doctors gave him two weeks to live, reports KIRO 7.

Cooks and his twin sister, Diamonique Cooks, received their diplomas in a special graduation ceremony organized by the school and the community to ensure that the Cooks twins would be able to share the momentous occasion together.

“I’ve just been battling that for two years or whatever and recently went to the doctor’s. The tumor had spread. It’s everywhere in my brain. It’s pretty bad,” Dom told KIRO 7.

According to the Federal Way Mirror, Cooks, a basketball and football standout for the Decatur Gators, was enjoying the sport that he loved when his coach first noticed a problem.

“I didn’t know what was going on and I even got my shot blocked by some scrub,” Cooks said with a smile. “Coach Sawyer was just watching me play and he saw that I couldn’t catch the ball with my left hand. It was bending in all the time. So one day before practice, Sawyer told me to tie my shoe and I couldn’t. He then said that I couldn’t play for him anymore until I got a note from my doctor. Coach Sawyer probably saved me.” Following the basketball incident, Cooks went to the doctor and they thought that the lack of feeling in the left side of his body was caused by a pinched nerve. Earlier in the year, Cooks had been in a sledding accident and doctors thought that might have been when he pinched a nerve. But the numb feeling never went away and, eventually, his left leg would start to drag behind his body while he was walking. That’s when doctors ordered an MRI and the tumor on his brain was discovered. “After I took the MRI, I was the only person in the room who didn’t know what a tumor was,” Cooks said. “The doctor said, ‘Dom, you have a brain tumor.’”

Because of the location of the tumor, doctors could not operate on it. Intense chemotherapy and radiation seemed to have killed the tumor, but it grew back in October of last year. At that time, doctors gave the hopeful student-athlete three to six month to live.

Genie Stovick, one of Dom’s teachers who was visibly emotional during the ceremony told the graduate that his illness does not define him.

“The fact that you are ill might be about the least important and the least interesting thing that there is to know about you,” Stovick said through tears.

Doug Baldwin, wide receiver for the Super Bowl champion Seattle Seahawks, made a surprise appearance and presented Dom and Diamonique with jerseys.

“I was blessed with the opportunity to meet this wonderful man. And the first thing he said to me was, ‘Aww, you’re not so big,’” Baldwin said, adding that he knew that Dom was a special young man from the moment he met him.

According to WSBTV, though Dom has been given two weeks to live, if his medication is successful, he may be able to live for another two months.

Even with all that he is going through, Dom thanked God and said that he isn’t giving up the fight. The determined senior plans to beat his fatal diagnosis and play basketball again.