Did Trump Know About Payment To Stormy Daniels? He Says No
POSTED BY WLAS April 6th, 2018 0 COMMENTS 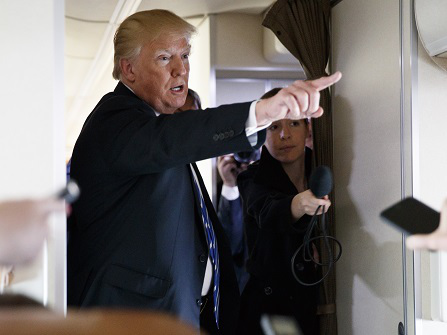 He also said he didn’t know why his longtime lawyer, Michael Cohen, had made the payment and didn’t know where Cohen had gotten the money.

Until now, Trump had avoided questions on Daniels, though the White House has consistently said Trump denies a relationship. Still, he has been dogged by the focus on the adult-film actress, who says she had a sexual encounter with the president in 2006 and was paid to keep quiet about it as part of a nondisclosure agreement she signed days before the 2016 presidential election. Daniels is now seeking to invalidate that agreement.

Her attorney, Michael Avenatti said in a statement: “Our case just got that much better. And we very much look forward to testing the truthfulness of Mr. Trump’s feigned lack of knowledge concerning the $130k payment as stated on Air Force One.”

Avenatti, who has sought to have Trump give sworn testimony, added, “It is one thing to deceive the press and quite another to do so under oath.”

Daniels, one of several women pursuing potentially damaging legal action against Trump, has kept up the highest profile in the media, helped by a punchy Twitter feed, a widely viewed interview on CBS’ “60 Minutes” and a camera-ready attorney who has become a fixture on cable news. 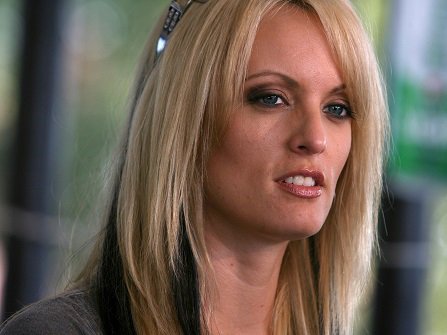 Daniels, whose real name is Stephanie Clifford, has offered to return the $130,000 as she tries to “set the record straight.” She’s said she had sex with Trump once in 2006, a few months after the birth of his youngest son, and their relationship continued for about a year. Trump married his current wife, Melania, in 2005, and their son, Barron, was born in 2006.

On “60 Minutes,” Daniels described a sexual encounter with Trump that began with her suggesting he should be spanked with a magazine that featured his picture on the cover and then giving him a “couple swats.” She also said she was threatened to keep silent about the relationship while out with her young daughter.

Daniels argues the nondisclosure agreement is legally invalid because it was signed by her and Cohen only, not by Trump.

Cohen has said that he paid the $130,000 out of his pocket and that neither the Trump Organization nor the Trump campaign was a party to the transaction with Daniels and he was not reimbursed for the payment.

Earlier this week, Trump asked a federal judge to order private arbitration in the case. Trump and Cohen filed papers in federal court in Los Angeles asking a judge to rule that the case must be heard by an arbitrator instead of a jury.

Avenatti said they would oppose private arbitration, arguing it should be heard by the American public.

Avenatti also wants Trump to give sworn testimony in the case, but a federal judge ruled this week that those efforts were premature. If ultimately successful, it would be the first deposition of a sitting president since Bill Clinton had to answer questions in 1998 about his conduct with women.

Trump faces a number of allegations about his sexual exploits long before he ran for president.

Former Playboy model Karen McDougal recently told CNN that she had an affair with Trump that started in 2006 and ended in 2007.

She filed a lawsuit in Los Angeles seeking to invalidate a confidentiality agreement with American Media Inc., the company that owns the supermarket tabloid National Enquirer. It paid her $150,000 during the 2016 presidential election.

Trump is also facing a New York defamation lawsuit filed by Summer Zervos, a former contestant on “The Apprentice.” Zervos has accused Trump of unwanted sexual contact in 2007 and sued him after he dismissed the claims as made up.

A judge ruled the lawsuit can move forward.