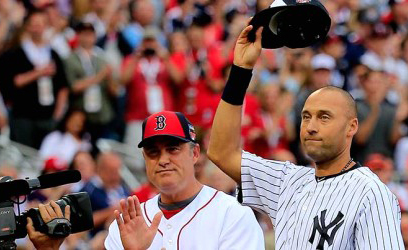 Playing in his final All-Star Game on Tuesday night, the New York Yankees star went 2-for-2 with a run scored and left in the top of the fourth to a three-minute ovation from the Target Field crowd.

Always known for his flair for the dramatic, Jeter lined the second pitch he saw from St. Louis Cardinals pitcher Adam Wainwright down the right-field line for a double to start a big first inning for the American League. He’d come home to score when the next batter, Mike Trout, hit a triple off the right field wall. A Miguel Cabrera homer later in the inning made the score 3-0 for the AL.

Jeter then went 2-for-2 on the night when he hit a single off Cincinnati’s Alfredo Simon in the third. The single gave him 13 hits in 13 career All-Star Games, and he’ll finish with a .481 career All-Star average.

The crowd at Target Field gave Jeter a warm reception during introductions and also when he stepped to the plate. The “De-rek Je-ter” chant usually reserved for the Bronx rang out as he stepped into the box while the National League players on the field, including Wainwright, gave him a round of applause.

The real reception, however, came in the fourth, when Jeter took the field only to be replaced by Chicago White Sox shortstop Alexei Ramirez. Jeter hugged Ramirez and then retreated to the top of the dugout step where he saluted the crowd with a tip of the cap. He then did a hugging tour of the dugout as Frank Sinatra played over the stadium’s PA. He emerged one final time for a curtain call.

While many assumed Jeter’s final All-Star Game might feature a lot of pomp but not much substance, the 40-year-old proved a lot of people wrong and put together a perfect sendoff for himself.

It was pure Jeter.