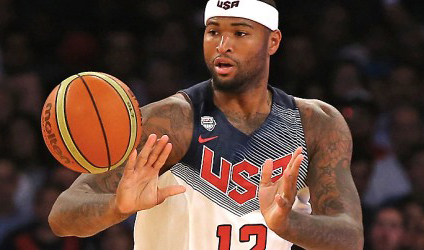 The NBA is an increasingly global organization, but international tournaments like the ongoing FIBA World Cup of Basketball expose American athletes to nations and cultures they may have never experienced. The 12 men on Team USA may know that many of their opponents hail from lands with rich basketball heritages, or that various noteworthy NBA players learned the game in these countries. But do they know the specific national character of these teams? Or even where to locate them on a map?

On Tuesday, Team USA faces Slovenia (also a pre-tournament exhibition opponent) in the quarterfinals of the World Cup. Before the game, one media member decided it was worthwhile to hand American center DeMarcus Cousins a geography test (via EOB):

For the record, Slovenia rests in Europe between Italy (to the west), Austria (to the north), Hungary (to the northeast), and Croatia (to the east and south). But Team USA and Slovenia face off in Barcelona, Spain, which is much easier to locate for basketball-loving Americans, if only because it was the site of the Dream Team’s triumph in the 1992 Olympics. Not that any of this information matters to Cousins, who was brought into Team USA to win a gold medal, not to consult Wikipedia entries before every contest (although basic research could help with in-game trash talk).

Cousins deserves credit for exposing the rank condescension at the root of this question. The only reason to ask it is to expose the ignorance of the recipient, to indulge in a tired stereotype of the uneducated (and almost always black) American basketball player with no knowledge of the world outside of his immediate experience. The question itself proves nothing — plenty of my overeducated friends can’t pinpoint Slovenia. All it shows is that someone has lived a life in which it was necessary to know the location of a nation that didn’t exist before the dissolution of Yugoslavia in 1991.

Yet the importance of this point extends well beyond this particular event. In turning around the question, Cousins proves how these questions are always dependent on circumstances. The Mobile native asks the reporter to find his home state on a map, and the fact that he can’t do so reflects little more than his own parochial tendencies. In this case, it’s fairly easy for an American audience to identify the stereotypical attitudes in the reporter’s question, because relatively few people in this country could find Slovenia without some kind of assistance.

However, Cousins is no stranger to condescending treatment — he’s even received it from the head of USA Basketball. In a broader sense, there’s not much difference between this incident and the various petty disagreements that have added up to lend the Sacramento Kings star a reputation as a terrible guy despite the fact that he’s never been involved in a serious off-court incident (which isn’t to say he’s easy to coach). Team officials and media members have often been guilty of the same kind of treatment of Cousins in the past. Perhaps we should all take this interaction with a foreign reporter as a chance to learn a lesson rather than as another opportunity to band together in patriotic pride.