David N. Dinkins, the first and only Black person to hold the post of mayor in the city of New York, died Monday night. He was 93 years old.

The New York Post reported his death first. Dinkins died of natural causes at his home in Manhattan, according to NBC New York.

His death came about a month after his wife died.

Even though he only served a single term in office, Dinkins left behind a legacy of decreasing the city’s crime at a record rate, something that many people often incorrectly ascribed to Rudy Giuliani, who succeeded him in 1993.

David Norman Dinkins was born in Trenton, N.J., on July 10, 1927. After finishing high school in Trenton, Dinkins enlisted in the U.S. Marines and ultimately earned a Congressional Gold Medal.

Dinkins went on to enroll in and graduate from Howard University before earning a law degree from Brooklyn Law School.

It was from there that Dinkins began to make a name for himself in New York City as a part of Harlem’s famed Carver Democratic Club, which boasted such legendary members as Basil Paterson, the father of former New York Gov. David Paterson; now-retired longtime New York Rep. Charles Rangel; and Percy Sutton, who was Malcolm X’s attorney before he was killed. Together, they became known in the city as the “Gang Of Four,” these men would go on to top political posts within New York and abroad.

After several political appointments in New York, including becoming Manhattan’s borough president in 1985, Dinkins defeated his Republican opponent, Giuliani, in the general election following a victory in the Democratic primary that surprised many. Dinkins entered the office amid scandal, as the outgoing administration was mired in allegations of corruption. 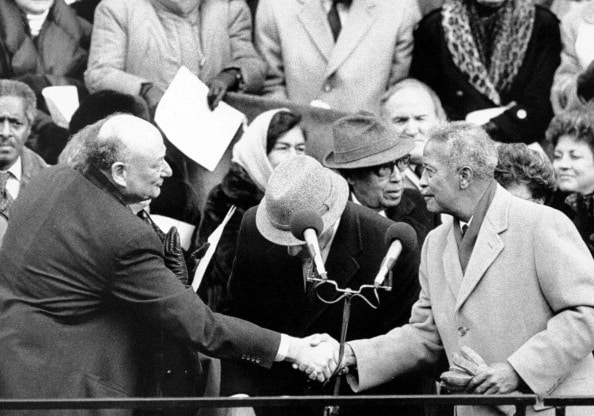 Dinkins thrived in his post, creating the Safe Streets, Safe Cities program that lowered the city’s crime rate more than any other time in modern history. Dinkins also negotiated with the state legislature to dedicate a tax in hiring thousands of police officers. In addition, he helped to initiate a plan to keep schools open longer in a bid to keep teenagers off the streets.

Dinkins did not win re-election in 1993, losing to Giuliani amid talks by some experts that he failed to connect with Jewish voters. Despite the loss, Dinkins remained active in politics by endorsing candidates and the like. Dinkins also moved on to humanitarian efforts, such as serving on the board of the Jazz Founders of America, which helped work with elderly jazz and blues musicians to find them homes and health care.

Dinkins’ death followed that of his longtime wife, Joyce Dinkins, who died Oct. 12 at the age of 89.

She and her husband are survived by their two children and two grandchildren.

This is a developing story that will be updated as additional information becomes available.