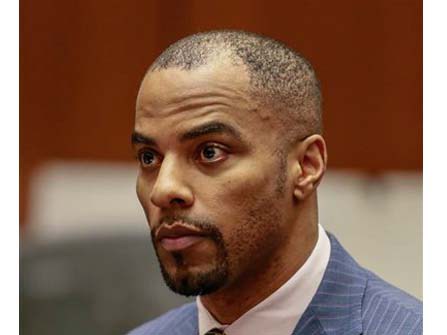 Former NFL star Darren Sharper, accused of drugging and raping several women in four states, could spend up to 20 years in prison under a revised plea deal accepted by a federal judge in New Orleans on Tuesday.

On Tuesday, Milazzo said the new deal reflected the federal sentencing guidelines of a 15- to 20-year prison term for the crimes alleged.

Sharper‘s sentencing is set for June 16.

The 40-year-old Sharper, appearing in court shackled and wearing orange prisoner garb, pleaded guilty last May to drug charges related to two incidents in which three women were drugged and raped in New Orleans in 2013, when he was working as an NFL Network analyst.

The revised plea deal requires Sharper, a former New Orleans Saints player, to comply with a lifetime of parole and probation restrictions following his prison term.

Federal sentencing guidelines allow Milazzo to consider allegations by 16 women nationally who claim to have been sexually assaulted by Sharper, although not all of the allegations resulted in formal charges.

U.S. prosecutor Michael McMahon told the judge that since her rejection of the previous plea deal, Sharper has agreed to cooperate with the government and be interviewed.

Federal prosecutors have charged two other individuals in New Orleans who allegedly conspired with Sharper to commit crimes against women. Their trial has been set for May.

The retired player also pleaded guilty to related charges in Louisiana state court. His state sentencing was delayed until the federal case is resolved.