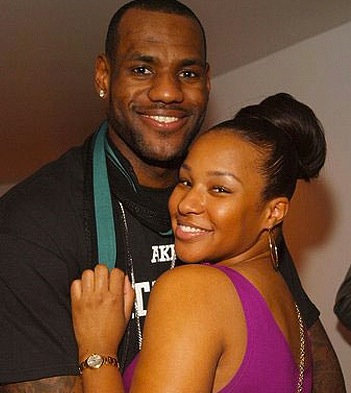 Just in time for their six-month wedding anniversary, LeBron James and wife Savannah are expecting a new addition to their family.

According to TheYBF.com, the newlyweds are pregnant with their third child, joining 9-year-old LeBron James Jr. and 7-year-old Bryce Maximus James. Savannah — who supported her hubby at NBA All-Star Weekend with a maybe-it-is, maybe-it’s-not baby bump in February — is rumored to be four months, approximately 15 weeks, along.

Hopefully there new little bundle of joy will be a baby girl. Lebron expressed his desire to have a daughter on Instagram in January. “OMG I NEED A DAUGHTER,” he captioned a photo with teammate Chris Bosh’s little princess. “I’m too jealous of u dude! She’s amazing. #DaddysLilGirl.”LeBron and Savannah, who met in high school, made their union official this past September in front of 200 family and friends in San Diego, Calif.