Clowney Picked No. 1 Overall; Watkins Taken No. 4 By Buffalo
POSTED BY WLAS May 9th, 2014 0 COMMENTS 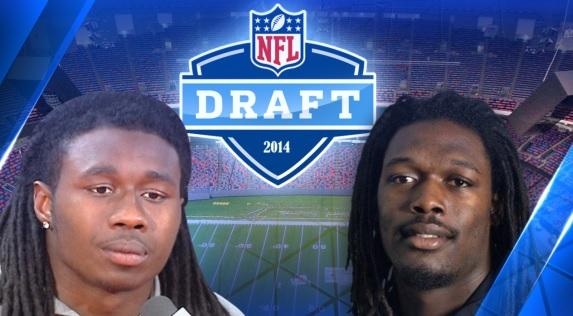 Former South Carolina Gamecock Jadeveon Clowney was taken as the first pick in the NFL Draft by the Houston Texans Thursday and former Clemson Tiger Sammy Watkins was selected with the No. 4 Overall pick by the Buffalo Bills.

Watkins’ head coach Dabo Swinney said “I could not be happier for Sammy and his family. This is just unbelievable. Two of the greatest players in Clemson history are now teammates. C.J. has been blowing up my phone since the announcement was made. This could not be a better situation for Sammy. There are now five former Clemson Tigers on the Bills roster. The first thing I said to Sammy’s mother is that he could not have a better mentor than C.J. Spiller. He’ll show Sammy the ropes.”

Clowney was the No. 1 ranked prospect coming out of high school three years ago and was the first pick in the NFL Draft after three seasons at South Carolina.

The following is an excerpt from Clowney’s draft profile at www.NFL.com

“Was USA Today’s National Defensive Player of the Year, a Parade Magazine All-America selection and the state of South Carolina’s “Mr. Football” in 2010, finishing his storied senior season with 162 tackles, 29 tackles for loss and 29.5 sacks with 11 forced fumbles and five defensive touchdowns. Also played part-time at running back. Arrived on campus in 2011, appearing in 13 games (one start) as a true freshman and tallying 36 tackles, 12 tackles for loss and eight sacks with one pass batted and five forced fumbles. Was selected as the SEC’s Freshman of the Year. Finished sixth in the Heisman Trophy voting in 2012 and was the SEC’s Defensive Player of the Year after registering 54 tackles, 23.5 tackles for loss and 13 sacks with two passes batted and three forced fumbles in 12 starts at defensive end. Was just the second Gamecocks sophomore to earn unanimous All-America honors, joining George Rogers (1980). Set school single-season records in tackles for loss and sacks and a school single-game mark with a 4.5-sack performance against Clemson. Missed one game, sitting against Wofford to rest an ailing foot. In 11 games in 2013, he had 40 tackles, 11.5 tackles for loss and three sacks with four passes batted and one forced fumble. Missed two games with injuries (bone spurs in foot, muscle strain near rib area). Had a pair of well-publicized speeding citations in December 2013 (going 110 mph in a 70 mph zone and 84 mph in a 55 mph zone). Concluded his three-year college career with 47 tackles for loss, 24 sacks and nine forced fumbles in 36 games.”

Sammy Watkins was widely considered to be the best Wide Receiver prospect in the 2014 NFL Draft.

Here is an excerpt from Watkins draft profile at www.NFL.com

“Brother, Jaylen, played cornerback at Florida (2010-13). Sammy was an elite recruit out of Florida, where he also won the AA state title in the 200 meters and finished second in the 100 meters. In 2011, was just the fourth first-year freshman in NCAA history to garner AP first-team All-America recognition, joining Herschel Walker, Marshall Faulk and Adrian Peterson — started 10-of-13 games and produced 82 receptions for 1,219 yards (14.9-yard average) and 12 touchdowns. Hurt his right shoulder against Wake Forest and sat out against North Carolina State. In May ’12 was charged with two counts of misdemeanor possession when he was pulled over and found to have marijuana and pills he didn’t have a prescription for (expunged upon completion of pre-trial intervention). In the fall, served a two-game suspension before starting 7-of-10 games played and managing 57-708-3 (12.4) opposite Texans ’13 first-rounder DeAndre Hopkins. Did not play against Boston College (abdominal virus) and was knocked out of the Chick-fil-A Bowl against LSU on the second play (right ankle). Started 12-of-13 games in ’13, racking up 101-1,464-12 (14.5), including 16-227-2 against Ohio State in the Orange Bowl. For his career, also returned 60 kickoffs for 1,376 yards (22.9), including a score, and returned punts 9-23 (2.6). Added 52 rushes for 339 yards (5.3) and a touchdown. Owns 23 Clemson records, including career receptions (240), receiving yards (3,391) and touchdowns (27, tied with Hopkins).”