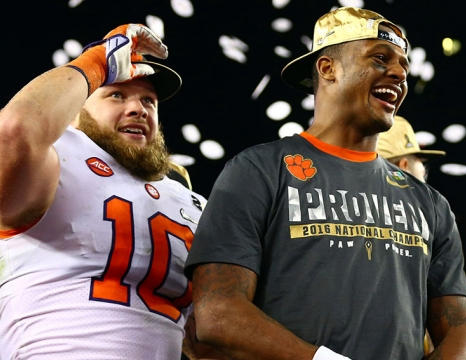 Clemson quarterback Deshaun Watson threw a two-yard touchdown pass to receiver Hunter Renfrow for the go-ahead score with one second left on the clock to give the Tigers a 35-31 victory over the Alabama Crimson Tide in the College Football Playoff national championship on Monday at Raymond James Stadium in Tampa.

Deshaun Watson rolled to his right and completed a two-yard pass to Hunter Renfrow as the receiver backpedaled across the goal line for a game-winning touchdown.

“This is bigger than just me,” Watson told reporters after the Tigers defeated the Crimson Tide, 35-31, by scoring 21 points in the fourth quarter.

Watson completed a 24-yard pass to Mike Williams and a 17-yard pass Jordan Leggett to put the Tigers in scoring position. Renfrow caught the touchdown pass with one second left in regulation.

The Crimson Tide led 14-7 at the end of the first half before the Tigers made a comeback.

In the third quarter the Tigers took advantage of a poor punt and good field position at the Crimson Tide’s 42-yard line.
Renfrow caught a 24-yard pass for a touchdown and Clemson trailed, 17-14.

Alabama freshman quarterback Jalen Hurts responded with his longest completion of the game, a 68-yard pass to tight end O.J. Howard, and the Crimson Tide took a 10-point lead, 24-14.

In the fourth quarter, Clemson scored on back-to-back possessions when Mike Williams caught a four-yard pass for a touchdown and Wayne Gallman rushed one yard for a touchdown. The Tigers led, 28-24, with 4:38 remaining.

But Hurts rushed 30 yards for a touchdown to help the Crimson Tide retake the lead, 31-28, with a little more than two minutes on the board — enough time for Clemson’s nine-play, game-winning drive.

Alabama running back Bo Scarbrough was injured during the third quarter. He rushed for 93 yards and two touchdowns in 16 carries.