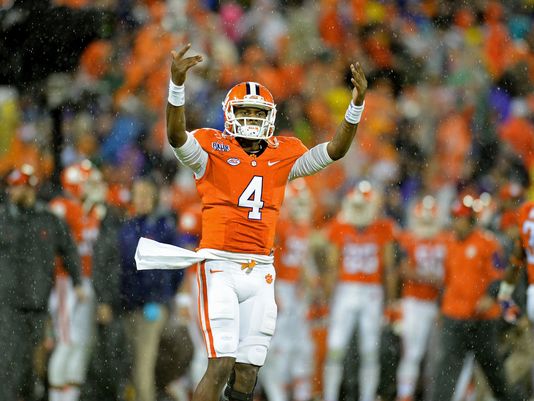 CLEMSON, S.C. —Deshaun Watson threw for two touchdowns, ran for a third and Clemson’s defense stopped DeShone Kizer on a tying two-point conversion as the 12th-ranked Tigers held on to beat No. 6 Notre Dame 24-22 on Saturday night.

Tigers linebacker B.J. Goodson had an interception and a fumble recovery to halt two fourth-quarter drives by the Fighting Irish (4-1). But the biggest stop was by defensive tackle Carlos Watkins, who brought down Kizer short of the goal line with seven seconds left.

Kizer rallied Notre Dame from 21-3 down in the second half with two touchdown passes, the last a 1-yard toss to Torii Hunter Jr.

Clemson secured the Notre Dame’s onside kick and closed out the victory, moving to 4-0 for fourth time in five years.