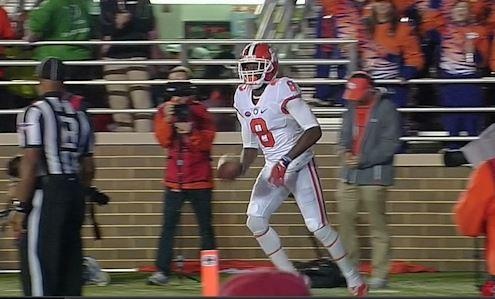 Clemson broke three plays of at least 50 yards in the first quarter, two for touchdowns and another that set up a score. Watson picked off a defender on the edge to help spring Gallman for the game’s first touchdown. Watson’s 59-yard touchdown pass to Jordan Leggett made it 21-0 late in the first half. That was all the Tigers needed.

Clemson: Hard to expect an A-plus effort from the Tigers, who were coming off a draining, dramatic victory against Louisville and traveled north on short rest. There were plenty of Clemson fans in the sellout crowd of 44,500, but not much intensity in Alumni Stadium. Still, the Tigers took care of business and seemed to come out of the game healthy.

Boston College: The Eagles just can’t match-up against this level of opposition. BC’s best first-half drive covered 80 yards and got inside the Clemson 1. Twice on fourth-and-goal, quarterback Patrick Towles fumbled the snap because center Jim Cashman was knocked into the backfield by Tigers tackle Scott Pagano. The first one was wiped out by an offside penalty by Clemson, so Pagano did it again.

Clemson star defensive tackle Christian Wilkins, from Springfield, Massachusetts, had four tackles, two for loss, including a sack, in his first college game in his home state.