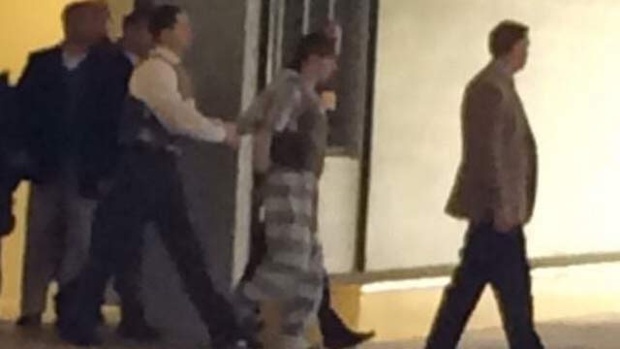 CHARLESTON, S.C. (AP) (WCSC) —A federal magistrate entered not guilty pleas on 33 federal charges, including hate crimes, for a man accused of gunning down nine parishioners at a black church in Charleston.

During Friday’s hearing for 21-year-old Dylann Roof, his attorney told U.S. Magistrate Judge Bristow Marchant that his client wanted to enter a plea of guilty to all the counts. But the lawyer said that because the government hasn’t decided whether to seek the death penalty on some of the counts, attorneys could not advise Roof on the issue.

Marchant then entered not guilty pleas on all counts.

Roof appeared in a gray striped prison jumpsuit, his hands in shackles. He answered “yes” several times in response to the judge’s questions but otherwise didn’t speak.

Marchant also heard briefly from family members of victims of the June 17 attack.

According to Lynch, a federal grand jury in Charleston indicted Roof on 33 federal hate crime and weapons charges, bringing the total number of charges against him to 46.

Attorney Wilbur Johnson, who represents the families of the Emanuel 9, and South Carolina State Sen. Gerald Malloy, a close friend of pastor and state Sen. Pinckney, one of the shooting victims, arrived shortly before 9:30 a.m. for the hearing.

Attorney Stephen Schmutz, a representative for the Singleton and Hurd families, said the families trust in the system.

The arraignment was delayed from its originally scheduled time on Monday after requests from both the government and Roof’s defense attorneys.

“As set forth in the indictment, several months prior to the tragic events of June 17, Roof conceived of his goal of increasing racial tensions throughout the nation and seeking retribution for perceived wrongs he believed African-Americans had committed against white people,” Lynch said at a news conference on July 22.

Roof previously faced a judge on July 16 to be presented with the charges against him. Judge J.C. Nicholson set a trial date of July 11, 2016.