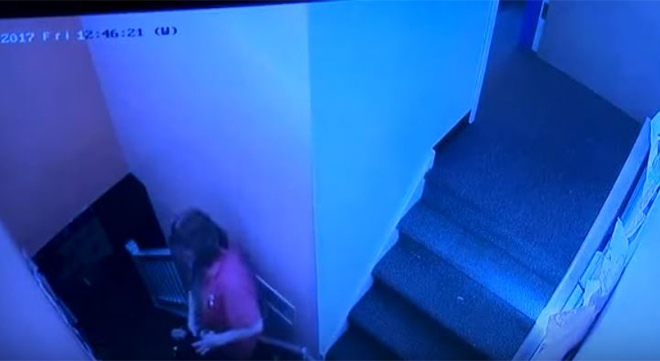 While some of us say crime appears to be at an all time high, others say not really, its just being caught on camera. I tend to agree.

Now that practically everyone is carrying a smart phone, its not so easy to do your dirt in private. Take the Pennsylvania daycare worker who was recently fired after a surveillance camera appeared to show her pushing a four-year-old child down the stairs.

The video is brutal…and “allegedly” aside, this b*tch clearly appears to push the child. But I digress…

According to Good Morning America, on Monday, Delaware County police Superintendent Michael Chitwood identified the worker as Sarah Gable, 52, of Folcroft, Pennsylvania. Gable is charged with simple assault, harassment and endangering the welfare of children, according to court documents.

Chitwood also said on Monday that he plans to request that an additional charge of recklessly endangering another person be added.

A manager at Child Care of the Future Daycare Center in Primos, Shawayne Tavares, had watched the video in real time as it happened on Friday and said the only reason the camera (installed only half an hour earlier) was there in the first place was to keep the kids, who sometimes sneak out and play on the steps, safe; and the center protected.

Not because anything bad had been reported.

Tavares said Gable was hired in June 2015, and she had passed all of the background checks. She told local ABC-owned station WPVI, “I was so upset. It just hurt me. We don’t treat children here like that,”

Gable was confronted after the incident, then police were called. She has since been fired.