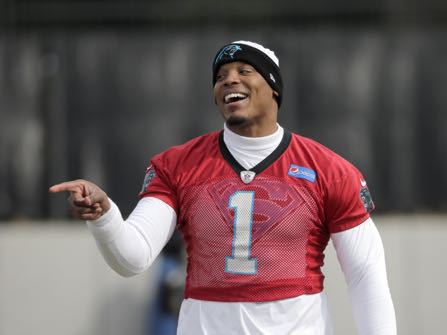 CHARLOTTE, N.C. (AP) — Panthers quarterback Cam Newton suggested for the first time Wednesday that race may play a factor in why he’s become a lightning rod for public criticism.

“I’m an African-American quarterback that scares people because they haven’t seen nothing that they can compare me to,” said the 6-foot-5, 245-pound Newton.

The No. 1 pick in the 2011 NFL draft out of Auburn, Newton has his share of detractors who either don’t like how he plays, his celebrations or his abundance of self-confidence.

Newton, a leading league MVP candidate who is putting up record-breaking numbers, said he learned a long time ago that he can’t please everyone, and needs to be true to his personality.

“People are going to judge, and have opinions on things I don’t have control over,” Newton said.

The stout and speedy Newton is beating teams with his arm and his legs, throwing for 35 touchdowns and running for 10 this season. He has helped lead the Panthers (17-1) to their first Super Bowl since 2003. Carolina plays the AFC champion Denver Broncos on Feb. 7 in Santa Clara, California.

Newton acknowledged being leery of talking about how others may perceive him.

“I think it’s a trick question,” Newton said. “If I answer it truthfully it’s going to be ‘Aw, he’s this or that.’ But I will say it anyway.

“I don’t think people have seen what I am or what I’m trying to do.”

Newton said he hasn’t changed, and has previously responded to his critics.

“I said that prior to me being in this situation,” Newton said of being understood. “But when I said it then it was like, ‘Oh he is immature,’ or, ‘Oh he’s young and this that and the third.’ I felt a certain type of way then and I feel a certain type of way now — nothing has pretty much changed. They talk about maturity. They talk about skill set. … The only thing that has changed (about me) is that we’re winning now.”

Rivera, who is Hispanic, said he has battled that notion to some degree himself.

“It really should be about your merits more than anything else,” Rivera said. “More about what you have accomplished, what you have done. I think that is how we should judge people.”

Rivera said some people may simply not like Newton because of his personality.

The All-Pro quarterback plays the game with open enthusiasm, pointing his arms forward after running for a first down, doing the “dab” in the end zone and pretending to rip open his shirt like Superman. He gets his teammates to pose for pictures on the sideline near the end of games when the outcome is no longer in doubt.

None of that bothers Rivera, who said Newton needs to remain true to himself.

“I think some people believe you should be stoic when you play this game,” Rivera said. “But a lot of people disagree and think you should have fun. This is a kid’s game. I know there is a lot of money involved, but at the end of the day it’s about entertainment. If you aren’t enjoying yourself, don’t play the game —it’s that simple.”