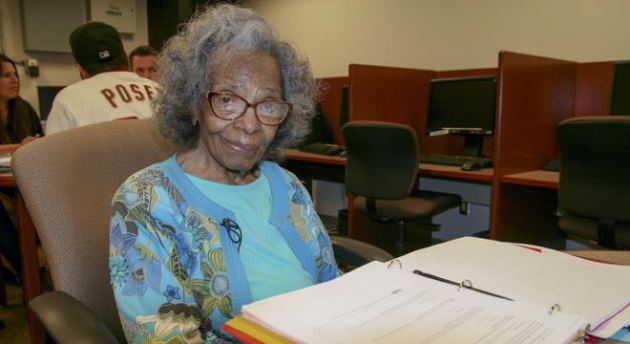 It’s safe to say that Dorothea Daniels is living proof that it’s never too late to accomplish a goal. The Santa Clarita, California resident earned her associate’s degree this week – at 99 years of age. The great-grandmother earned her Associates Of Arts degree in social sciences from College of the Canyons, becoming the oldest graduate in the school’s history.

During her lifetime, 99-year-old College of the Canyons graduate and Agua Dulce resident Doreetha Daniels has lived through the Great Depression, World War II and the fall of Nazi Germany, the Civil Rights movement, the moon landing, the collapse of the Berlin Wall and end of the Cold War and, and most recently, the ushering in of the digital information age.

But with all the drama the past has offered, Daniels — who is originally from North Platte, Nebraska — had yet to be presented with a challenge quite like earning her associate degree.

However, when she walks across the stage to receive her diploma on Friday, June 5, Daniels will have accomplished her own personal goal of earning a degree before turning 100.

She will also cement her legacy as a College of the Canyons first.

“There will be some tears of accomplishment for sure,” said Daniels, who will hold the record for being the oldest COC graduate in the college’s 45-year history. “I understand that to earn a degree in college at age 99, that’s a bit unusual.”

In spring 2009, Daniels began taking courses at the college’s Canyon Country campus with a goal to earn her degree and walk at graduation.

To those who may have wondered why Daniels would pursue such a goal so late in life, Daniels simply explained she had always lived life to the fullest, and achieved many things, but never completed her education.

While most students attend college to earn a degree with the hope of launching a career or enhancing their skillset in order to climb the corporate ladder, Doreetha came to COC simply to better herself.

Surrounded by students typically ranging in age from 18 to 24 years old, Daniels was without question an outlier. As a result, she had to overcome a number of associated challenges on her educational journey.

Seemingly routine tasks, such as driving to school and traversing the campus, take considerably more effort to coordinate for Daniels than the average student.

In the classroom, other challenges presented themselves — namely the necessity of computer literacy in order to complete modern college courses. Daniels also experienced issues related to hearing class lectures and keeping pace with other students.

But she persevered — even when that meant venturing into the often-dreaded arena of college-level math and statistics courses.

“It’s been 63 years since I’ve taken algebra even,” said Daniels at the time. “But I’ve learned a lot.”

Recognizing these challenges, Daniels simply worked harder. And eventually, that work paid off.