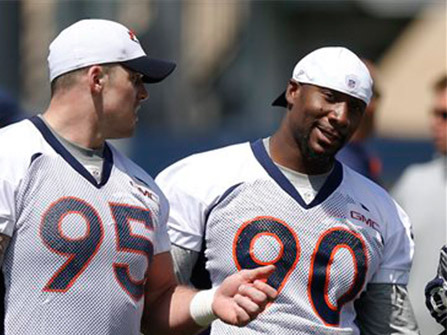 Smith has not been arrested and no charges have been filed. TMZ first reported the investigation.

Fort Bend County Sheriff Troy Nehls said a complaint was made against Smith in November and it was “sexual in nature.” After its investigation, the sheriff’s office forwarded its findings to the county District Attorney’s Office in February.

The district attorney’s office didn’t return phone calls from The Associated Press on Thursday. When contacted by the Denver Post, District Attorney John Healey declined to discuss the nature of his office’s investigation or confirm its target.

“Last night, we became aware for the first time of an allegation involving Antonio Smith,” the Broncos said in a statement. “We are now in the process of gathering more information.”

The 33-year-old defensive end signed a one-year, $2 million deal with the Broncos on April 2. In Denver, he has been reunited with the coach (Gary Kubiak), defensive coordinator (Wade Phillips) and D-line coach (Bill Kollar) under whose tutelage he excelled while playing for the Houston Texans from 2009-13.

A 12th-year pro, Smith started 16 games last year in Oakland but the Raiders released him this spring in a move that saved them $3 million.

Smith, a fifth-round draft choice by the Cardinals in 2004, spent his first five NFL seasons in Arizona. He has 44 1-2 career sacks and 11 forced fumbles in 157 career games, including 133 starts.