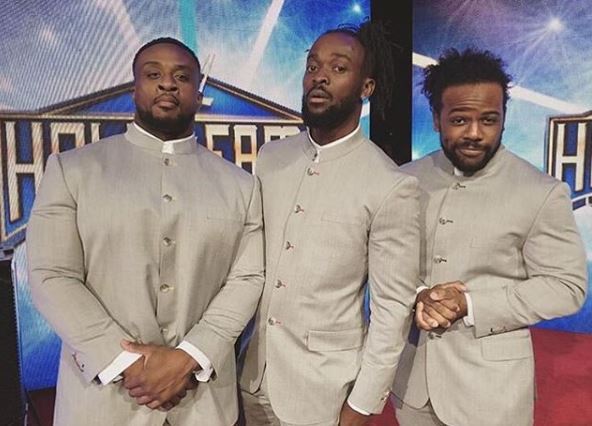 The WWE Hall of Fame has reinstated Hulk Hogan after suspending him in 2015 following a resurfaced 2012 interview in which he used the N-word repeatedly…and his black colleagues are not happy.

Kofi Kingston released a statement via Twitter Wednesday night on behalf of his wrestling crew The New Day, one of the more prominent all-black wrestling groups in the WWE, also composed of Ettore Ewen and Xavier Woods.

“How do we feel? Indifferent,” the statement reads.

“We find it difficult to simply forget [Hogan’s racist comments],” Kingston continued. “But we also do not respond with more feelings of hate. Instead, we just do not associate with the people who convey or have conveyed this negative and hurtful mindset. This instance will be no different.”

Kingston implied that the group would be open to revisiting this decision, pending Hogan’s future behavior: “Perhaps if we see him make a genuine effort to change, then maybe our opinion will change with him.”

“[Hogan’s] reinstatement won’t change anything for us,” Kingston’s statement concluded. “It will have zero effect on our ability to perform or the level of effort we will put into doing what we love to do.”

Hogan, real name Terry Bollea, was removed from all WWE websites and promotional material after his since-deleted 2012 radio interview with DJ Whoo Kid surfaced, where Hogan expressed frustration that he could no longer use the N-word—this despite the fact that wrestler Booker T used the term to refer to Hogan, which Hogan interpreted as a green light for him, a white man, to use the term as well.

“Well, Booker T used to do that to me, and every time I pull up YouTube there’s that famous thing with Booker T and his brother is there and they’re all talking trash, and Booker T says, ‘I’m coming for ya Hogan, you nigger’—and not ‘nigga,’ he goes ‘nigger,’” Hogan said to DJ Whoo Kid during the interview.

Hogan then went on to discuss time spent in Miami. “And everybody down there—Lil Wayne, Birdman—they’re all calling me ‘nigga,’ and then I started sayin’ it. And I always said it, but now all of a sudden I get heat when I say it, and they say, ‘Hogan, you can’t say that,’ so I say, ‘Why can they say it to me then?’”

Around the same time, Hogan was embroiled in a high-profile lawsuit against the now-defunct news site Gawker, after the site posted a clip from his sex tape with his friend’s wife Heather Clem. In pillow talk heard in the sex tape, Hogan took issue with his daughter, Brooke, dating a black man, whose father was allegedly helping fund her burgeoning music career.

“I don’t know if Brooke was f**king the black guy’s son,” Hogan is reported to have said to Clem. “I mean, I don’t have double standards. I mean, I am a racist, to a point, f**king niggers. But then when it comes to nice people and s**t, and whatever.”

But Hogan wasn’t quite finished: “I mean, I’d rather if she was going to f**k some nigger, I’d rather have her marry an 8-foot-tall nigger worth a hundred million dollars! Like a basketball player!”

“I guess we’re all a little racist. F**king nigger,” he concluded.

Hogan, for his part, took to Twitter after the Extreme Games last week to share his appreciation for the “love and support” he’s received from the WWE community amid his reinstatement.

“I’ve been praying for this day,” Hogan said in a tweet, adding, “I finally feel like I made it back home.”