Black Women Call Out DNC For Excluding Them From Leadership
POSTED BY WLAS May 27th, 2017 0 COMMENTS

Tuesday morning, a slew of Black women, including activists, community leaders, elected officials and others released an open letter to Democratic National Committee Chair Tom Perez calling for a meeting to discuss the state of Black women and the Party.

Black women have clearly been an integral part of the election of the last few Democratic presidents, and are loyal to the Democratic party beyond any other demographic. In fact, the letter notes that, “Black women voters are the very foundation to a winning coalition,” yet the party does not reciprocate this loyalty in any meaningful way.

Boldface names like Tamika Mallory, Marcia Fudge and Star Jones signed their names to the letter which reads in part,

“We have voted and organized our communities with little support or investment from the Democratic Party for voter mobilization efforts. We have shown how Black women lead, yet the Party’s leadership from Washington to the state parties have few or no Black women in leadership. More and more, Black women are running for office and winning elections — with scant support from Democratic Party infrastructure.

Investing in Black women’s political leadership is a solid return on investment, one that is rooted in facts and data. In recent years, Black women have proven to be the most active voting demographic in the nation. In 2008 and 2012, 70 percent of eligible Black women cast ballots, accounting for the highest voter turnout of any racial or gender group, proving that our voting power can and has determined elections. A closer look at the data shows that in 2012 Barack Obama won re-election by 4.9 million votes.

Black women cast a total of 11.4 million ballots, providing the margin he needed to win. This past November, even with a clear lack of voter mobilization investment and a decrease in overall Black voter turnout, 94 percent of Black women voted to keep this country moving forward by casting ballots for Hillary Clinton. In addition, on November 8th we saw important elected-office gains by Black women despite the otherwise dismal defeat of progressives during the general election.”

Further, the letter asks Perez directly, “How will you lead the Democrats forward? Will Black women be among those at the helm, helping to design the strategies, craft the message, mobilize troops, and lead the way—as policymakers, political strategists, activists, and elected officials?” 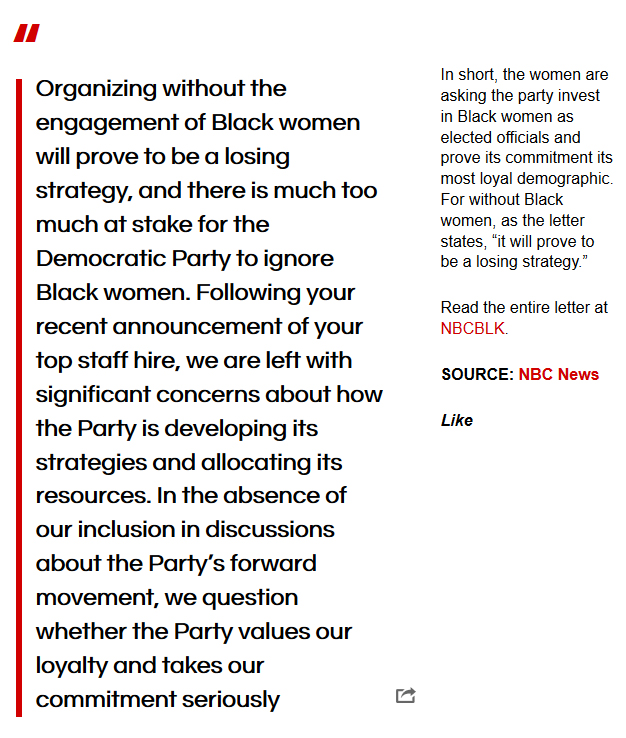