While Trump is babbling to Kim Kardashian about prison reform, young Black men are still being locked up for ridiculous reasons. Dayonn Davis, who is only 18, is about to spend five years in prison over a pair of Nike sneakers.

On January 17, 2016, Davis was 15 when he met someone from Facebook to buy Nike Oreo sneakers in Columbus, Georgia. Ledger-Inquirer reports, “Another male accompanied Davis to the rendezvous, where Davis asked to try on the shoes. Finding they fit, he told the seller, ‘These shoes is took.’ Davis’ companion then pulled out a pistol, and everyone ran. But Columbus police quickly tracked Davis down, and found the stolen shoes in his closet.” 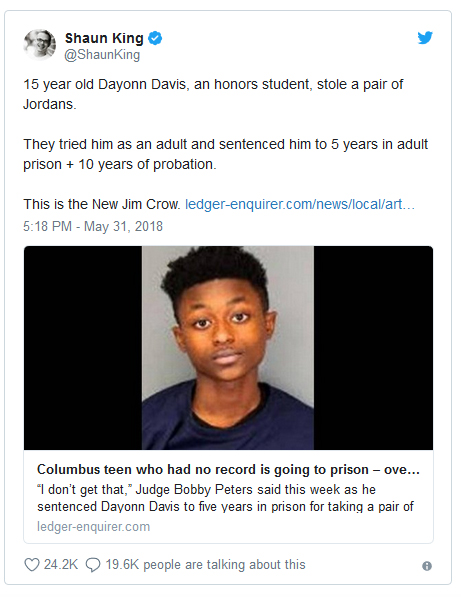 Davis named his accomplice but the victim, could not identify the person in a photo lineup. Davis claimed he did not know the second suspect would pull out a gun. Nonetheless, the 15-year-old was charged as adult with robbery. Even though this was his first offense and he has no record, the former honors student he has been sentenced to 5 years in prison and 10 years probation.

Accoridng to Ledger-Inquirer, Davis did not know the person with him would pull out a gun, but he is remorseful and said, “I was young at the time, so I wasn’t in my right mind.”

Judge Bobby Peters, who sentenced the teen, was heartless. When Davis’ mother said he was with the wrong person, he replied with, “He’s the one with the shoes in his closet.” As for the 5 years in prison? Ledger-Inquirer reportedly said, “Must be some valuable shoes.”

How insane that a Black teenager’s life is ruined over a pair of sneakers, when an adult man named Brock Turner only served three months in jail for raping a woman.