Baltimore Mayor Has Water Thrown In Her Face At A Festival, Woman Arrested
POSTED BY WLAS July 16th, 2015 0 COMMENTS 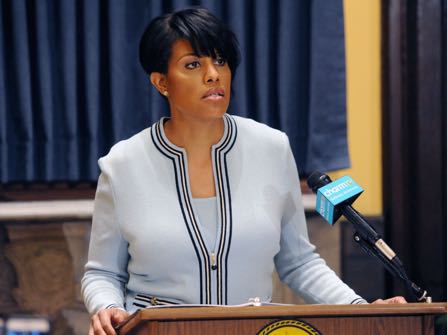 It’s not easy being a public official. And it certainly hasn’t been easy for Baltimore mayor, Stephanie Rawlings-Blake. Ever since the Baltimore uprising, Rawlings-Blake has faced the not so unique challenge of trying to be both on the side of the Black community, as well as being seen as trustworthy by the police, and still trying to fight crime in the city.

But she has also rightly received some criticism, especially in her handling of the Baltimore uprising. Which of course neither the Black community in Baltimore and beyond, nor the police officers in the city believed she handled well.

In the Mondawmin Festival on Saturday morning, according to The Baltimore Sun, Lacheisa Pailin-Sheffer, 37, dumped water on the mayor as she greeted residents at the festival. That is one way to express your frustration at your city’s mayor but it is undoubtedly not the most effective one.

Nothing has been achieved unless perhaps shocking the mayor and possibly prison time. Pailin-Sheffer has been charged with second degree assault. Rawlings Blake is fine and claims that she was shocked by the incident more than anything else.