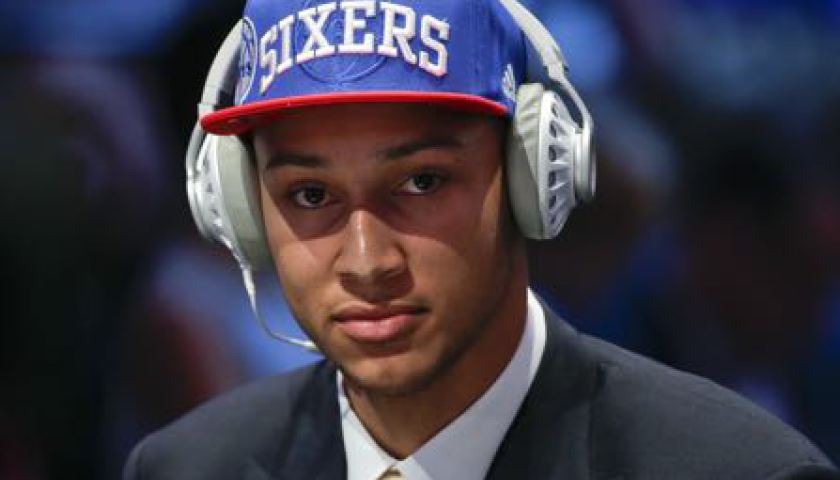 PHILADELPHIA (AP) — Ben Simmons was signing 76ers jerseys and eating cheesesteaks before he was even drafted.

With the great hope he can lift one of the worst franchises in professional sports, the Philadelphia 76ers took Simmons with the No. 1 pick in the NBA draft on Thursday night.

Simmons, the 6-foot-10, 242-pound forward out of LSU, was the top choice all along for Philly.

Up next, the 76ers went overseas to finish the first round.

The Sixers picked Timothe Luwawu out of France with the 24th overall pick and drafted guard Furkan Korkmaz out of the Turkish league with the 26th pick of the first round. Team president Bryan Colangelo had been open about his desire to nab another top-10 pick, and rumors swirled all day that the Sixers were willing to deal big men Nerlens Noel or Jahlil Okafor to make it happen.

“We were the recipient of more calls than calls going out,” coach Brett Brown said. “There’s a lot of interest in our players.”

Brown said he envisioned Simmons as a power forward — Noel’s position, though Okafor also played there.

“That will sort itself out,” Brown said.

The Sixers offered the Minnesota Timberwolves Noel, Robert Covington and the Nos. 24 and 26 picks for Providence point guard Kris Dunn, a person with knowledge of the negotiations told The Associated Press. The person spoke on condition of anonymity because the teams were not publicly discussing trade proposals.

The Sixers also have roughly $60 million in salary cap space as they and build toward respectability following a 10-72 season. With their second pick of the first round they drafted Luwawu, a 21-year-old 6-6 small forward.

“I’m a complete player,” he said in New York.

Korkmaz plays on the same Anadolu Efes club with 76ers prospect Dario Saric and might be stashed overseas for another season or two.

The Sixers did not have a second-round pick.

The 76ers had the top pick for the first time since they drafted Allen Iverson in 1996. He led the Sixers to their last NBA finals appearance in 2001.

Simmons must have been thrilled one of his favorite players took time to welcome him to Philadelphia.

“I actually had a poster of AI when I was young in my room,” the 19-year-old Simmons said. “It was a big diamond-cut poster of him with the braids. I just remember him being one of those point guards, a smaller guy with braids and cornrows and the headbands. I remember I used to have the cornrows when I was younger. He was one of those players that fought every day.”

The Sixers haven’t won an NBA title since 1983.

Maybe Simmons can make the difference.

Simmons averaged 19.2 points, 11.8 rebounds and 4.8 assists, the only SEC player ever to finish in the top five in all three categories. But the Tigers were only 19-14, failing to make the NCAA Tournament.

“I’m happy that the Sixers chose me,” he said at Barclays Center in New York. “It’s a great city and I’m looking forward to getting to Philly.”

Simmons, who grew up in Australia before moving to Florida for three years of high school at Montverde Academy, has already signed a $20 million sneaker deal with Nike and will be the feature of a Showtime documentary film called “ONE & DONE” that will debut in October, just before he debuts in the NBA.

He never demonstrated he could make jump shots consistently, rarely shooting from outside and going only 1 of 3 from 3-point range all season. He also exhibited an inclination to pass, rather than create his own shot, in the late stages of close games.

Simmons also had academic issues that made him ineligible for the Wooden Award, which is presented to the nation’s top college player.

Simmons didn’t work out for Philadelphia until Tuesday but there was familiarity with him long ago, Brown coached Simmons’ father in Australia. Simmons said Brown told him that someday he might play in the NBA.

He’ll get that chance in Philadelphia.

He could be one of at least three first-round picks to debut for Philly in 2016 — with two coming from the 2014 draft. The Sixers might finally have Saric should he break free from the final year of his European deal. Joel Embiid, the No. 3 overall pick of the ’14 draft, is inching closer to returning to the court and make his NBA debut after missing the last two seasons with foot injuries.

Brown said Thursday the Sixers would have an update on Saric’s future “very soon” and Embiid has started 5-on-5 drills.

“You can’t help but feel like you can touch people and see a team that’s taking shape and not feel like it’s going to move a lot,” Brown said. “There are a few people on this team you can touch and wrap your arms around. We can grow with it as a city and as an organization.”

Under a plan hatched by former general manager Sam Hinkie, the Sixers sacrificed talent and wins for three seasons to stockpile lottery picks they believed would become the building blocks for a contender.