Smith started her new position on Monday and will report directly to Apple CEO Tim Cook. 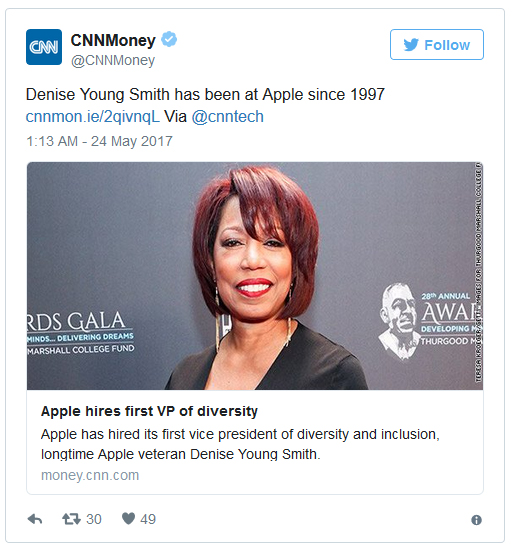 Apple’s diversity report states that the company worldwide is 68 percent male. Here in the United States, the tech giant is 56 percent White, 19 percent Asian, 12 percent Hispanic and 9 percent Black. Diversity remains an elusive goal for Apple and the technology industry.

Cook told Mashable that the tech community is at “fault” for the gender disparity.

“I think in general we haven’t done enough to reach out and show young women that it’s cool to do it and how much fun it can be,” he said.

The CEO added that his company is conducting outreach efforts from middle school through college to encourage women to pursue tech careers. Apple is also connecting with historically Black colleges and Universities, he said.

TechCrunch reported that Jeffrey Siminoff, who left the company in 2015, was the last person to lead Apple’s diversity efforts. Siminoff, however, held a director role. Smith, as a vice president, is empowered to have greater impact on the company’s initiatives.