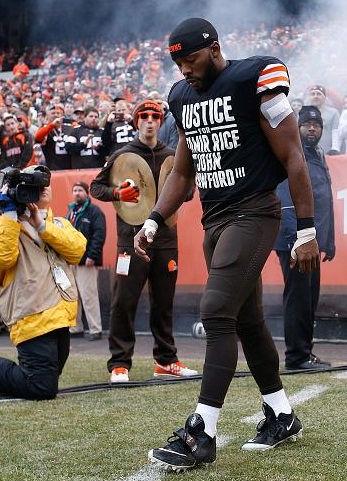 NFL players continue to use their platform to bring awareness to social issues despite backlash from police organizations and some fans.

This week, it was Cleveland wide receiver Andrew Hawkins, who wore a T-shirt reading “Justice for Tamir Rice and John Crawford III” during pregame warmups and introductions:

Tamir Rice, age 12, died last month after Cleveland police shot him while he was waving a pellet gun. John Crawford III was shot in an Ohio Wal-Mart earlier this year while holding an air rifle. Both cases have drawn scrutiny because of the uncertain and questionable reasons behind the shootings.

If the Browns follow the same path as other teams whose players have taken public stands on social issues, there will be no apology.