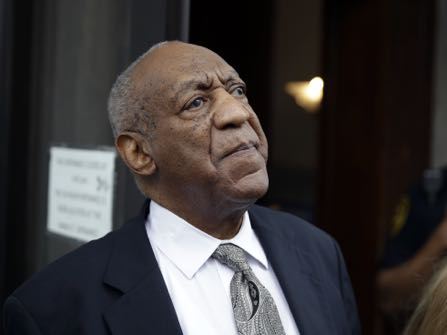 PHILADELPHIA (AP) — A judge agreed Thursday to let five additional Bill Cosby accusers testify at his April 2 retrial for an alleged 2004 sexual assault, giving prosecutors a chance to portray the man once known as “America’s Dad” as a serial predator who made a sadistic habit of drugging and molesting women.

Judge Steven O’Neill said prosecutors could choose the witnesses from a list of eight women with allegations dating as far back as the early 1980s. They include model Janice Dickinson, who said Cosby knocked her out with pills and raped her during a 1982 trip to Lake Tahoe.

Prosecutors, eager to expand the scope of the underlying he-said-she-said case, had pushed to let jurors hear from as many as 19 of the dozens of women who say Cosby assaulted them over a five-decade span.

“We are reviewing the judge’s order and will be making some determinations,” District Attorney Kevin Steele said.

Dickinson’s lawyer, Lisa Bloom, said if her client is picked, she would be “ready, willing and able to testify.” Bloom said Dickinson “has waited decades for this opportunity.”

Cosby’s lawyers argued prosecutors are trying to bolster an otherwise weak case with “ancient allegations” that would confuse, distract and prejudice the jury against the 80-year-old comedian.

“It just shows how desperate they are and that this is a very weak case,” Cosby spokesman Andrew Wyatt said after O’Neill’s ruling. “Mr. Cosby is innocent of these charges.”

Cosby has pleaded not guilty to charges he drugged and molested former Temple University women’s basketball official Andrea Constand at his suburban Philadelphia home in January 2004. He remains free on bail.

O’Neill has yet to rule on whether Cosby’s lawyers can tell jurors about his 2006 settlement with Constand.

Mesereau said in court March 6 that jurors would learn “just how greedy” Constand was when they hear details about how much money she demanded from Cosby and what the star wound up paying her.

Allowing additional accusers to testify is sure to keep Cosby in court longer than his first trial, which ended in a hung jury last year after six days of testimony and five days of deliberations.

Pennsylvania allows prosecutors to present evidence of alleged past misdeeds if they demonstrate the defendant engaged in a signature pattern of crime.

Prosecutors argue Cosby used his power and appeal as a beloved entertainer to befriend younger women and then plied them with drugs or alcohol before assaulting them.

Prosecutors tried to have 13 additional accusers testify at Cosby’s first trial last year, but O’Neill limited them to just one and barred any mention of about 60 others who have come forward to accuse Cosby in recent years.

Kelly Johnson, who worked for Cosby’s agent, testified Cosby knocked her out with a pill during a 1996 meeting at the Bel-Air Hotel in Los Angeles. She said she woke up to find her dress disheveled, her breasts exposed and Cosby forcing her to touch his genitals.

The only other hints jurors got of Cosby’s past came from deposition excerpts from 2005 and 2006 in which he admitted getting quaaludes to give to women he wanted to have sex with.

For prosecutors, having several accusers tell similar stories about Cosby would give them a chance to smooth over issues with Constand’s credibility and insulate her from attacks from his lawyers, who’ve already indicated they’re likely to paint her as a money-grubbing liar.

Dave Zuckerman, a former prosecutor who practices criminal defense in the Pittsburgh area, said that “might help put the case over the edge in favor of the prosecution.”

“Now it becomes more than just one accuser against Bill Cosby,” he said. “Now you have a pattern of multiple women.”

Also Thursday, Dickinson’s defamation lawsuit against Cosby was allowed to move forward after the California Supreme Court refused his appeal. Dickinson sued Cosby after he and his representatives said her allegations were false.

The Associated Press does not typically identify people who say they are victims of sexual assault unless they grant permission, which Constand and Dickinson have done.