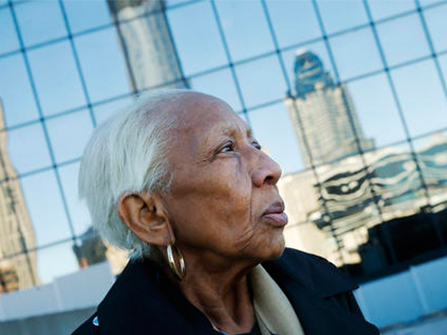 Doris Payne, the notorious 86-year-old jewel thief whose life was the subject of a Netflix documentary, was arrested again on Monday for allegedly shoplifting at an Atlanta-area Walmart — while sporting an ankle monitor from a previous bust.

Payne, whose larcenous career dates back to the 1950s, told NBC News that she simply forgot to pay for the items when she visited the store to buy medicine.

“Thieving was the farthest thing from my mind,” she said in a phone interview on Tuesday, adding that she had taken medicine that muddled her mind before she went shopping.

“It causes me to forget,” she said.

She claimed that since she didn’t have a basket, she dropped the items in a shopping bag and thought she told the cashier about them.

The police report, however, says a Walmart security officer witnessed Payne pile items from the pharmacy department in her purse and then transfer other items from her shopping cart to her purse and a shopping bag.

The guard nabbed her as she left the store and the items — which totaled $86.22 — were returned to the store. Payne was taken to the City of Chamblee Jail, booked on a shoplifting charge and released.

Payne insisted that stealing from Walmart was not her intention.

“I have a money card with $7,000 on it,” she said, adding that she is in the midst of negotiating a book deal and a movie deal.

In March, a judge sentenced her to 120 days of house arrest and banned her from malls in DeKalb County after she admitted stealing a $2,000 necklace from a store.

But she seemed unconcerned on Tuesday.

“For a minute, it looked like it was going to be bad,” Payne said of her latest arrest. “But I’m doing fine.”