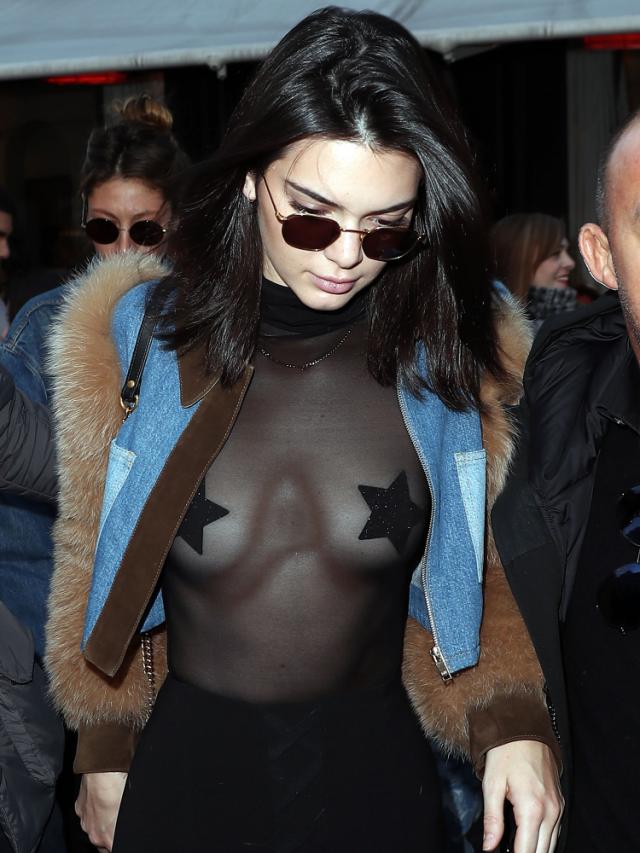 Kendall Jenner dazzled the crowd in a black and white plaid gown as she walked the runway for Givenchy’s fall/winter 2017-2018 collection at Paris Fashion Week on Friday. But it was on the streets of the City of Light on Saturday where the 21-year-old supermodel really left photographers seeing stars.

The Keeping Up with the Kardashians star was snapped on her way to dinner at L’Avenue restaurant with friends, wearing a completely see-through top with no bra.

Of course, this isn’t Jenner’s first time wearing a sheer outfit. She kept her nipples covered this time with star pasties — similar to the ones she rocked in her Vogue Japan spread in September 2015.

Also helping hide Jenner’s chest and keep her warm in the chilly weather was a stylish Sonia Rykiel cropped denim patchwork jacket with brown sued collar and fur sleeves. She paired the look with black and gold sunglasses and black cigarette pants.

At the Givenchy show on Friday, Jenner was joined by pal Bella Hadid. Cheering them on from the audience was 18-year-old Paris Jackson — who is also rapidly climbing the ranks in the “model kids with famous parents club” first, posing in a series of photographs during a fashion magazine shoot in France.