60 Years After His Horrific Murder, Emmitt Till Is Remembered And Celebrated
POSTED BY WLAS August 30th, 2015 0 COMMENTS 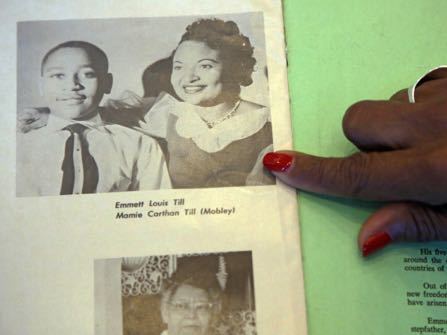 JACKSON, Miss. (AP) — Sixty years after a black Chicago teenager was killed for whistling at a white woman in Mississippi, relatives and civil rights activists are holding church services and movie screenings to remember Emmett Till.

They’re also trying to continue the legacy of his late mother, Mamie Till Mobley, who worked with young people and encouraged them to challenge injustice in their everyday lives. It’s a message that Deborah Watts, a distant cousin of Till’s, sees as relevant amid the killings in recent years of young black men such as Trayvon Martin in Florida and Tamir Rice in Ohio.

Watts, of Minneapolis, was a toddler when Till was killed. She said that as she grew up, she spoke often with Mobley about Till.

“It was her motivation to turn his death into something positive,” Watts said Thursday in Jackson.

The 14-year-old Till was visiting relatives in the cotton country of the Mississippi Delta on Aug. 24, 1955, when witnesses said he violated the Jim Crow social code by whistling at Carolyn Bryant, a white woman working behind the counter of a store in the tiny town of Money.

On Aug. 28, he was kidnapped from his uncle’s home a few miles away. On Aug. 31, his body was recovered from the Tallahatchie River, with a bullet hole in his head and severe cuts on his face. Barbed wire was wrapped around his neck and he was weighted down with a cotton gin fan.

Till’s mother insisted on an open-casket funeral in Chicago, and Jet magazine published photos of his corpse. The brutality sparked outrage that galvanized the civil rights movement.

In September 1955, an all-white, all-male jury in Sumner, Mississippi, acquitted the two white men charged in the slaying — J.W. Milam and his half brother, Roy Bryant, the husband of Carolyn Bryant.

On Friday in Chicago, a gathering is scheduled at Roberts Temple Church of God in Christ, where Till’s funeral was held. Organizers say that will be followed by a motorcade to Burr Oak Cemetery, where both Till and his mother are buried. A wreath will be laid at the gravesite of Mobley, who died in 2003.

Among those scheduled to participate in a Till memorial dinner Friday in Chicago are Sybrina Fulton, the mother of Trayvon Martin; and Michael Brown Sr., the father of Michael Brown Jr., whose slaying last year led to protests of police action in Ferguson, Missouri.

Movie screenings and other memorial events will be held Thursday through Sunday in Mississippi.

In 2007, a ceremony was held outside the Tallahatchie County Courthouse in Sumner, and a local committee apologized to Till’s extended family. The courthouse itself re-opened earlier this year after being restored to look as it did during the trial of Milam and Bryant. The small Emmett Till Interpretive Center opened across the street from the courthouse, and it has attracted school and church groups from across the country.

The center’s director, Patrick Weems, said Thursday that teenagers, in particular, relate to Till as they listen to his story.

“We get to understand that race and racism are not something unique to the Mississippi Delta,” Weems said. “It’s an issue that faces the entire nation.”