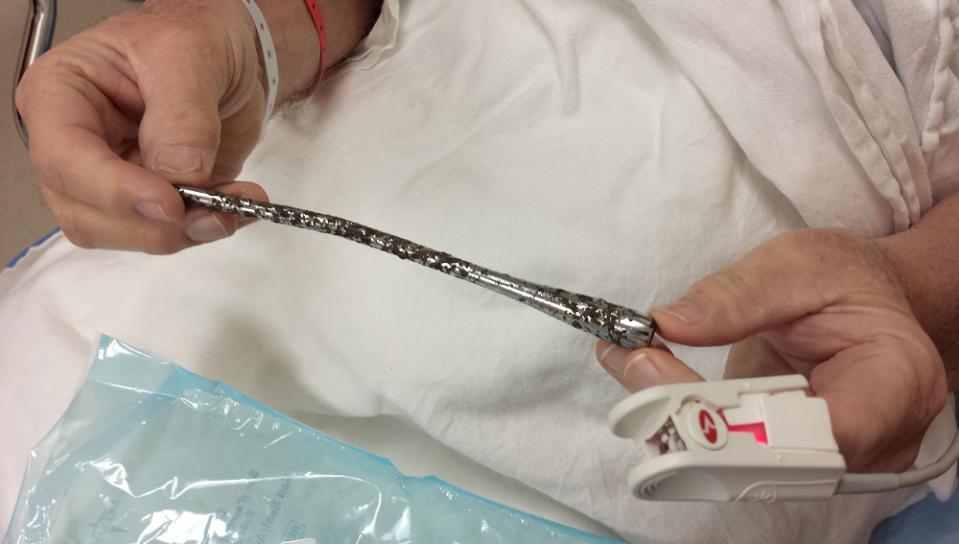 CREVE COEUR, Mo. (AP) — Fifty-one years ago, Arthur Lampitt of Granite City, Illinois, smashed his 1963 Thunderbird into a truck. This week during surgery in suburban St. Louis, a 7-inch turn signal lever from that T-Bird was removed from his left arm.

The St. Louis Post-Dispatch (http://bit.ly/1EOtGa6 ) reports that the accident broke Lampitt’s hip, drawing attention away from the arm, which healed.

A decade or so ago, his arm set off a metal detector at a courthouse. An X-ray showed a slender object the length of a pencil, but since it caused no pain or hardship, Lampitt was told to let it be.

He was moving concrete blocks a few weeks ago when the arm began to hurt for the first time.

“Everything was fine until it started to get bigger,” Lampitt’s wife, Betty, said. “The arm started bulging.”

Lampitt decided to have surgery. He initially wasn’t sure what was in the arm. He wondered if perhaps a medical instrument had been left during the emergency room visit in 1963.

He unearthed a collection of old photos of the mangled Thunderbird taken by a friend at the scene. He noticed the metal blinker lever was missing from the left side of the steering column. He figured that was it, and surgery at City Place Surgery Center in Creve Coeur, Missouri, confirmed it.

Lang said a protective pocket grew around the lever.

“We see all kinds of foreign objects like nails or pellets, but usually not this large, usually not a turn signal from a 1963 T-Bird,” Lang said. “Something this large often gets infected.”

Lampitt wasn’t sure what he’d do with the lever — maybe make a key chain out of it.

“We’ll figure out something, I am sure,” he said.