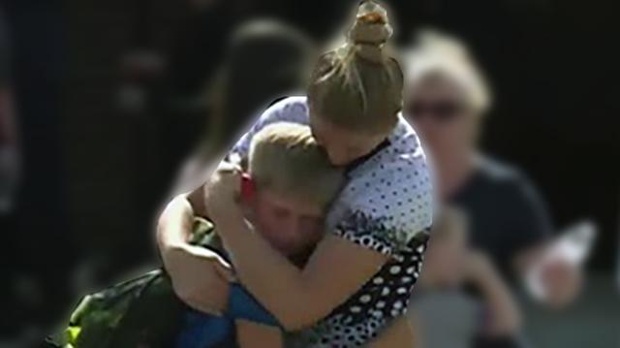 TOWNVILLE, S.C. —A 14-year-old is in custody after a shooting at an Upstate elementary school Wednesday afternoon left two students and a teacher wounded. That attack followed a shooting at a home a few miles from the school in which the teen’s father was killed.

ACSO Capt. Garland Major said one of the 6-year-old boys was shot in the foot, the other in the leg and first-grade teacher Meghan Hollingsworth in the shoulder.

One of the injured boys, Jacob Hall, was airlifted to Greenville Memorial Hospital where he underwent surgery Wednesday afternoon.

As of 8 p.m. Jacob (pictured) as still in critical condition according to a Greenville Health System spokesperson. 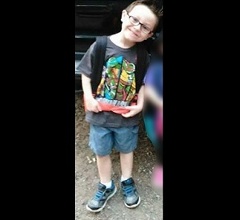 “We appreciate the community’s support, especially the Townville Rescue Squad, who treated Jacob onsite and brought him to the hospital,” Jacob’s parents, Rodger and Renae Hall, said. “We appreciate everyone’s thoughts and prayers and ask for privacy during this difficult time.”

Emergency officials said Jacob was critically injured, and if not for the intervention of first responders, the “outcome would have been very different.”

The second boy and the teacher were taken by ambulance to AnMed. They were treated and released, Ross Norton with AnMed said.

A truck, believed to have been driven by the teen, crashed into a fence surrounding the playground and was left there.

Anderson County Deputy Chief Keith Smith said the shooting happened on the playground and the shooter never got inside the school.

Jamie Brock, 30-year veteran volunteer firefighter who responded to the school after the shooting, took down the suspect on the playground, Smith said.

Brock was not armed, officials said.

Sheriff John Skipper said Brock likely prevented more shots from being fired by confronting the shooter and taking him down.

The teen was armed with a handgun, ACSO Capt. Garland Major said. He said the shooting had no racial or terrorist undertones.

Investigators said there is no known relationship between the suspected shooter and the victims at the school.

Armed officers were at the school about seven minutes after the call and the suspect was in custody in less than an hour, officials said.

Gov. Nikki Haley released a statement saying: “As we work together with law enforcement to make sure they have the support they need to investigate what happened in Townville, Michael and I ask that everyone across South Carolina join us in praying for the entire Townville Elementary School family and those touched by today’s tragedy.”

Haley arrived in the Upstate Wednesday evening, but she did not make any public appearances.