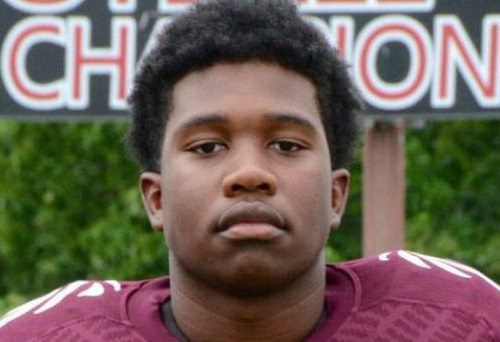 A community in Knoxville, Tennessee is currently mourning the death of one of their star athletes who they now refer to as a hero.

15-year-old Zaevion William Dobson and several friends were hanging out on the evening of December 17th when 23-year-old Brandon Perry drove through the neighborhood and “randomly fired multiple times.”

According to NBC, Dobson was killed when he threw himself over three girls to protect them from the gunfire. The young ladies were not injured.

Earlier that night, Perry and two accomplices shot at his mother, Lisa Perry. She was hit in the lower back but is expected to make a full recovery.

The shooting spree came to an end around 2:00 am on December 18th when Perry was shot while driving resulting in him crashing his car into an apartment building. His two accomplices were quickly taken into custody.

One man has been released, the other, Christopher D. Bassett, is being held without bond. Bassett has a previous arrest record and his charges related to this incident include being a convicted felon in possession of a firearm and probation violation.

Police believe Dobson was randomly targeted amidst events that were gang-related.

During a press conference, Knoxville Police Chief David Rausch was visibly shaken by the events. He apologized for crying while explaining how the heartbreaking incident had unfolded.

“These cowardly and senseless acts of violence must stop,” Rausch said. “We should be preparing to celebrate the Christmas holiday, but now we have two men who are dead.”

“[He was] only a sophomore, but a very contagious young man who was very liked by his peers and his teachers,” Black said. “It’s going to be a tough time as we leave from here and go meet with our football players.”

“[Dobson was] involved in sports and a mentee of one of our organizations in town. But still he falls victim to this…He was really one of our success stories” said Rogero.

Dobson’s teammates have also shown their support for their fallen classmate with the tweet, “We want you to know that Zaevion was an outstanding young man who will always be remembered as a hero.”

AP reports that President Obama has said the same about Dobson.

In a Twitter post on Sunday, Obama said: “Zaevion Dobson died saving three friends from getting shot. He was a hero at 15. What’s our excuse for not acting?”

Knoxville, Tennessee, police say Dobson, a 15-year-old sophomore, was killed last week as several men went on a shooting spree in the city.

One of the men later died from injuries. Two others were arrested, though one was released after being questioned.

Obama commented during his annual Christmas vacation in Hawaii.