11th Grader Told Her Afro Needed To Be ‘Fixed’ And Couldn’t Be Worn In School
POSTED BY WLAS May 26th, 2017 0 COMMENTS 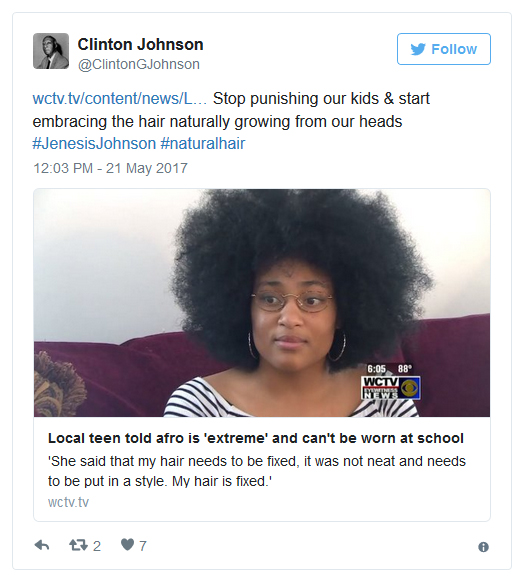 A 17-year-old Florida student is lashing out at her school for telling her that her natural hair was a problem.

According to WCTV, Jenesis Johnson was told by her teacher at North Florida Christian School in Tallahasee that the afro she’d been wearing for the past seven months needed to be done and that it was a was a distraction to classmates.

Her response? “My hair is fixed.”

She also says that she was asked in front of other students “how long did she plan on wearing that way?”

Two days later she called down the assistant principal’s office who then allegedly said to her, “Your hair is extreme and faddish and out of control. It’s all over the place.”

WCTV reported that the school’s handbook stresses that students shouldn’t wear “faddish or extreme hairstyles, and hair should be neat and clean at all times.” If they do “the administration will make the decision on any questionable styles.”

And while Johnson’s mother says that she understands the handbook’s rules, she also believes that it sends a culturally incompetent message to students of color to like her daughter.

“You might say that it didn’t fit the handbook,” Lisa Johnson said. “But what she heard is a woman telling her is that she’s not pretty; her hair does not fit society.”

In addition, Johnson was told that while she can finish the semester with her hair as is, but if she returns when school starts back up in the fall with this same doo she will receive a refund for the semester and no be allowed to come back.

This report comes weeks after Black students at a Boston charter school were unfairly disciplined for wearing braids and another Floridia teen was told to fix her natural hair.

Can these schools leave our girls alone and let them be?