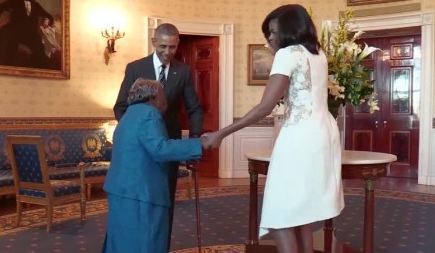 Virginia McLaurin’s excitement when she saw President Barack Obama in person for the first time can best be encapsulated in one word.

And with a shimmy and a shake, the 106-year-old woman opened her arms wide and gave the Leader of the Free World, a Black man, a huge hug.

McLaurin beamed with pride as she gazed upon his face and he held her hands in his. When he smiled and said, “You want to say hi to Michelle?” Her smile got even wider and she let out a loud, “Yeaaaaa!”

Then the dialogue went a little something like this:

“I never thought I would live to get into the White House,” McLaurin said as she looked back and forth between POTUS and the First Lady. “And I tell you, I am so happy.”

After the First Couple assured McLaurin—here on out, she will be referred to as Ms. Virginia—that they were happy to have her, she said in disbelief, “A Black president.”

Michelle responded, “Look at him, right there.”

Then Ms. Virginia got in her sister-girl stance, and said, “A Black wife.”

And what did Ms. Virginia say in response?”